Spiritual? Paranormal? Cult? What is Hereditary about?

From left to right: The cast of Hereditary—Milly Shapiro stars as Charlie, Toni Collette stars as Annie, Gabriel Byrne stars as Steve, and Alex Wolff stars as Peter. CREDIT: A24

Hereditary (2018, directed by Ari Aster) is certainly one of the most stunning films I’ve watched this year. Though the story might not be on par with the cinematic styles and aesthetics that is present throughout the film; it is definitely a must-watch for audiences who are seeking to watch something that will leave you pondering deeply about the film’s meaning.

Despite watching this film two months late, I’m glad that I’ve avoided reading any spoiler discussion articles about it; because going into Hereditary with no expectations was what made my movie-going experience a fulfilling one. I had only seen the trailer and know that it’s a horror film; but apart from that, I had no idea what it was about.

This arthouse horror film left me blown away by the framing and composition of every scene—particularly the ones where the miniature art work is edited to be part of the film world. 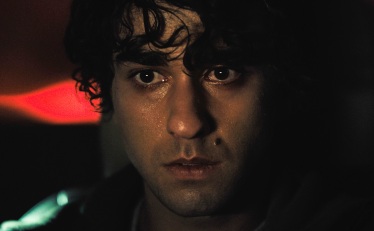 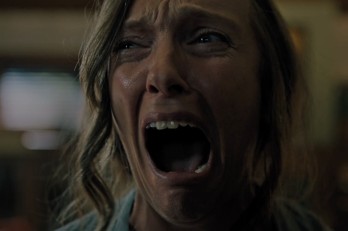 Having seen Collette in Showtime’s TV series United States of Tara before, I was equally impressed by her capability as an actress to do what she did here and in the former. Her ability to showcase different emotions throughout the film was outstanding; the horrid look on her face when she screams incited a sense of fear in me—it was just that believable! Wolff also does a stellar job in his role as Peter. I’ve only ever seen him as a child in Nickelodeon’s The Naked Brothers Band, and more recently in the Jumanji: Welcome to the Jungle sequel. His performance in Hereditary showcases his range as an actor; he portrays the broody, scared, and guilty high school teenager perfectly.

Making her film debut in Hereditary, Shapiro’s Charlie is so creepy that it gave me the chills. With very little character dialogue, what makes Charlie stand out is her unique/unusual clucking habit; her facial expressions and actions in the film also contributes to her character to be one of the creepiest element in Hereditary.

Aster’s use of cinematically stunning shots, complemented by a chilling score—composed by Colin Stetson—really elevated the entire film.

True enough, the score does get more intense as the plot progresses.

The film definitely contains a lot of hidden meanings to it and it would require your full attention to gain a sense of what’s going on. But fret not, even if you leave the theatre feeling confused, New Rockstars has a great spoiler explanation on their YouTube channel. I recommend checking out Hereditary, especially on the big screen!