Orange Is the New Black closes out its series with one of the best conclusions I’ve ever seen on a television show. 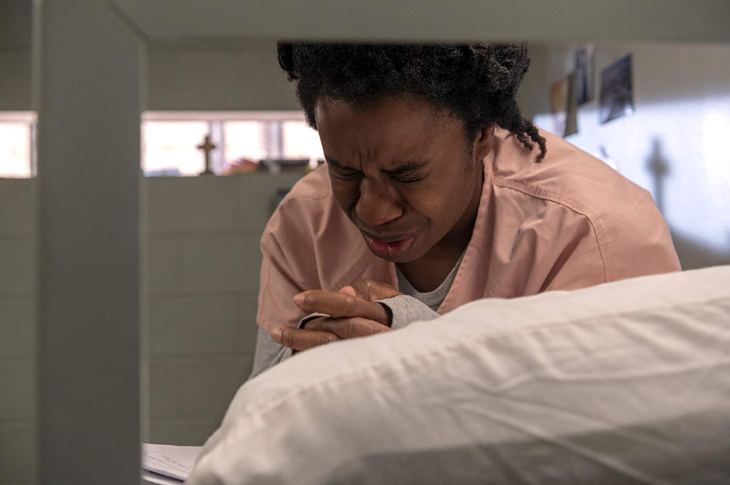 This post for Orange Is the New Black (OITNB) Season 7 is spoiler-free.

For characters that have been with me for so long, I feel sad that I will no longer be able to see how they’re doing on the small screen. In the final season of Orange Is the New Black (OITNB) (2013-2019, created by Jenji Kohan), audiences got to see the stories of Piper (Taylor Schilling), Alex (Laura Prepon), Suzanne (Uzo Aduba), Taystee (Danielle Brooks), Black Cindy (Adrienne C. Moore), Nicky (Natasha Lyonne), Lorna (Yael Stone) and Red (Kate Mulgrew), all come to an end.

Though some of the seasons of OITNB may have been a hit or miss, Season 7 definitely ends on a high note. Carrying on the story from Season 6 (2018), the show still continues depicting stories of these women, while introducing new plot points and bringing in new characters to mirror real-world events.

Right from the get-go, it’s clear that OITNB set out to be an impactful show. Seven seasons and 91 episodes later, a Poussey Washington Fund has been set up as a permanent way to help female offenders in America. It’s so rare that a TV show isn’t just created for pure entertainment and ratings; for many years to come, people will remember OITNB as the show that discussed the hard topics and shed light on the ongoing problems in American politics.

Even though I’m not from America, where the series is set and based in, I still feel deeply connected to OITNB and the women in this show. I may not fully understand the politics of the American system, but watching these incarcerated women struggle with reintegration back into society feels all too familiar, as it’s something that all inmates face no matter which part of the world they are from.

Season 7 gives audiences the idea that although the stories of these fictional characters may have concluded—the system, the prison, and the reformation plans for real-life offenders still has a lot of work to be done before it’s fixed.

The only issue I would nitpick with OITNB is the show’s timeline. Season 7 is supposedly meant to take place in 2014 or 2015, but topics—#MeToo and immigration issues in America—covered in this season are concurrent with real-world issues that have been happening since 2017. Even the Love Island episodes that Fig (Alysia Reiner) was watching in the show is the 2018 season. I think as audiences, we have to gloss over the fact that the timeline on OITNB has been iffy, and instead focus on the overall important message that the series is sending.

If Game of Thrones can score a record-breaking number of Emmy nominations for its terribly written final season this year—here’s to hoping that the well written OITNB Season 7 will not be forgotten during next year’s awards season, as the cast, writers, and show deserve a huge win.